Turtle in a Bucket- A Friendly, Spiritual Application 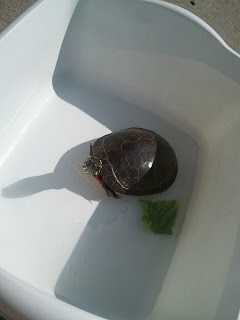 Today I rescued a little turtle. If you've known me for quite awhile you'll know that's what I do. I save wild robins, little froggies, ...turtles :)

I love where I live. These little creatures teach me so much about God. Amazing.

The turtle had been crossing the street. We all know how fast cars are, and how slow turtles are. I temporarily put the turtle in a bucket, and kept him by the front door. He immediately was trying to escape. I watched him struggle for a bit, but then I tipped the bucket slightly so he could slide out. At the first site of freedom he scurried his little webbed feet from the porch into the grass, and hid under a pine bush. I was just about to let him be when I thought, "Hmm... he's probably trying to make it over to the pond which is a 10 minute walk from here. He'll never survive."

I decided to go fetch him again. This time when I tried to catch him he was far more anxious. I put him into the bucket for the second time and noticed he was trying much harder than before to climb out. I grabbed my keys, jumped in the car with the turtle on the seat beside me, and headed for the pond. The whole time he looked petrified, angry, and confused. If only he KNEW that I was helping him, taking him to a far better place, he wouldn't be so anxious. It hurt me to know that he was so miserable and frightened out of his mind, but I kept driving. The end would be totally worth it. 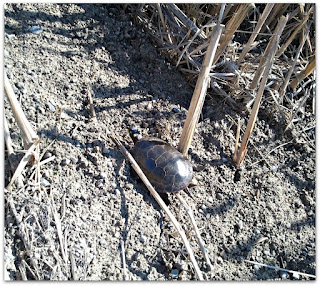 I arrived at the pond, and put him onto the dry dirt and grass. He seemed caught off guard. Again he started scurrying away climbing over long leaves, tall, straw-like grass and shrubs to get to the water. I thought again, "This guy is going to have a real hard time climbing over all the stuff. I should just get him more directly into the water". Funny, when I tried to pick him up the third time, he let me. It was as if he was starting to understand. I was actually helping him.
When I finally placed him in the water it was so cool. He was in his element. He was so cute. Bobbing his head in and out, playfully swimming. Okay-- I get too excited I know.

Here's the thing: the whole time I was thinking about God, and the way He sees us. I'm sure that so many times God has to put us in "buckets"and we cry and complain, and get upset with God because we are going through so much pain. We think He is out to get us. We don't trust Him. We are afraid.  What if you knew He was taking you to a better place? What if a beautiful pond was just around the corner in your life? 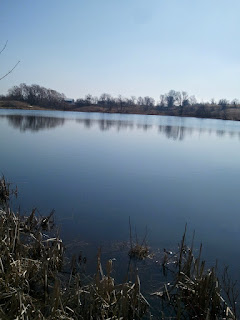 Can I remind you that God LOVES you? He has a perfect and beautiful plan for your life. Gosh-- He is so good...to think He would even take time to teach me that lesson today.