It’s really been such a long time since I've blogged. The last entry was in June. How terrible! This year has probably been one of the fastest years I've ever experienced. In just a couple months, it will already be Christmas-- and in just about one month, it will be my one year wedding anniversary! Craziness!

Well, since June, there really is a whole lot that I could fill you in on, but I've decided to dedicate this blog to my latest experience at the Austin Stone Worship Conference, in Texas. I spent the first morning exploring the city. Cities are always amusing to me because you have the rich and poor living closely side by side. You have homeless people begging on the street for coins, while 6 figure-making business men sit inside ritzy cafes or restaurants enduring long meetings. Needless to say, regardless of people's exteriors, you know deep down each person is dreaming of happiness. After much window shopping and gps navigating, I decided to take a stop inside probably one of the nicest coffee lounges I have ever been in: the Departure Lounge. I started to journal and pray. I wanted God to prepare my heart for what was about to happen during the next couple days. 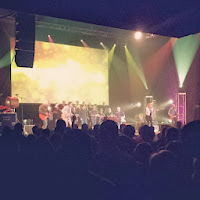 That evening I walked all by my lonesome to the Austin Music Hall which was where the conference was being held. The first night of worship absolutely blew me away. When you have a room full of artists and worship leaders singing from the depths of their soul, there's nothing like it. I was so moved. I was actually battling a bad cold (still am) so I hardly sang, but I just soaked it all in. I stood there closing my eyes, allowing myself to get lost in the beauty.

Following the service we were all dismissed and invited to get a free gift on the top floor of the building, as well as enjoy a live concert series at 'the Parish' on 6th Street. I quickly introduced myself to a couple girls around my age as I didn't want to wander around town by myself at night. The girls were God sent. We immediately clicked and had so much in common and so much to talk about. We enjoyed a lovely organic concert by Penny & Sparrow, as well as Miranda Dodson. We had to leave before Matt Mccoloskey took the stage.

All the speakers on Wednesday were incredible. I was torn between taking extensive notes or just simply listening to the powerful words being spoken. Worship leader and artist Charlie Hall had a lot of wisdom to share with the audience. He talked about how so often we want to do what God asks with a little twist. God might call is into music ministry, or to lead a church, and we get so distracted by our own 'ego' that we end up pursuing His will for our own personal gain. Maybe we try and write the next big worship song not because we are simply moved, but because our hidden agenda is to get our name out there. We often want to do things that will bring God great glory so that we can share some of it. However, we will never really be effective until we are working side by side (with no pretenses) with Jesus. We cannot serve the church without doing it FOR Jesus and WITH Jesus. For the sake of time I'm going to take some massive leaps here. Skipping ahead to our small group sessions, I went to one lead by Jourdan Johnson called, "Is This Really My Identity". The conversation centered around learning to embrace God's own personal story for our lives rather than getting caught up in the game of comparison. We need find confidence and contentment in our own callings, as we celebrate, encourage, and inspire each other as women in ministry. As artists sometimes we can be so focused on iTunes sales, or how many events we're playing at, that we forget God is at work with something so much bigger.


Any Jill Paquette fans out there??? The group I was with discovered I was from Canada and then a voice called out, "I'm from BC!" I looked behind me as this outgoing woman started to chirp in on the question I had posed about understanding the difference between being a performer (singer-songwriter), and leading worship. For me I feel there is such a huge gap between the two. Jill expressed the exact same feelings. She explained, "Some people think because I play and sing that leading worship is a give-in. That couldn't be further from the truth. Leading worship is a whole new world". At the time I didn't know Jill's last name (or Artist name) until after the discussion was over. When I found out, it was so neat to have met an artist I grew up listening to. It was humbling to know that even the more seasoned artists shared my weaknesses and we could encourage each other.

Now on to some of the meat and potatoes. The last thing I want to share is a moving message by Jesse Reeves. This sermon wrecked me, and Jesse isn't even a pastor. This blog won't do justice. I will just be scratching the surface. Bear with me:

Feed My Sheep
Jesse brought to life one of the most familiar stories found in the old testament. He talked about the life of David, starting from when David was first anointed as king in 1 Samuel 16. 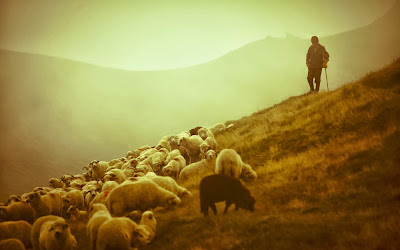 Samuel Anoints David:
Samuel goes to the house of Jesse (David's father), asking to look at all his sons. One by one each son is turned down by Samuel. Even the eldest is rejected. Finally Samuel says, "Are these all the sons you have? The Lord has not chosen any of these". I can imagine Jesse feeling perplexed. Sure, there was one more son, but he was the baby of the family. He was just a small shepherd boy. What use could he be to Samuel? Still, Jesse brings him in. David was God's choice. "The Lord does not look at all the things people look at. People look at the outward appearance, but the Lord looks at the heart" (Samuel 16:7). Samuel takes a horn of oil and and anoints David as king in the presence of his brothers. What would YOU do if you were anointed as royalty? Would your perspective change? Would you start expecting more from people or lording over them? Chances are, we probably wouldn't go quietly about it. Yet David, after been anointed as king, simply goes back to tending his sheep.

David in Saul's Service:
Isn't it interesting, how in your Bible, the next chapter is probably labeled, "David' in Saul's Service". After David is anointed, instead of raging war against Saul and taking his rightful crown, David becomes a servant. When Saul is emotionally distressed he urgently cries out for someone to play music for him to soothe his anxious heart. David is summoned from his regular shepherd duties and becomes a loyal servant and music minister.

Next heading...David and Goliath
David has been faithful in the little things, and now God has called him to things much larger. When the Philistine army threatens to destroy all Saul's men, David is the one brave enough, and willing to fight their biggest warrior, Goliath. Even Saul thinks David is too small for the task. Saul says: "You are not able to go.... you are only a young man, and he has been a warrior from his youth..." But David replies: "Your servant has been keeping his father's sheep. When a lion or a bear came and carried off a sheep from the flock, I went after it, struck it and killed it...the Lord who rescued me from the paw of the lion and the paw of the bear will rescue me from the hand of this Philistine..."

So much is said in these verses. It's so hard to unpack it in a short blog. David loves his sheep. He has spent so much time caring for them, risking his life for them. What a foreshadow of Christ. David's heart is what catches God's attention. David is someone that God can use because he has a loyal and compassionate heart. Because David has been faithful in the lesser things, now God has brought him to face battles far greater, and he will be victorious.
The bottom line here is, David never let his head get too big that he forgot his first calling, which was to take care of the sheep. When Jesus repeatedly told Peter in the new testament to feed his sheep three times, it wasn't because Jesus was trying to do anything poetic with the number three, or because Peter was deaf. I believe it was because we so quickly forget. We need to be reminded. I don't think it had sunk in the first time Peter heard Jesus' words.

I was so humbled towards the end of the service. So convicted to make every day matter. So often we hear a word from the Lord, "Amy (insert your name here), I'm going to anoint your ministry..." And the first thing we think of is: Green room. Big opportunities. That is the way Jesse put it. What we do in the waiting process between getting anointed and "becoming King", is where our character is proved. It's so easy to get up on a stage and share the good news. So easy. It's not as easy getting down and dirty, going to all the abandoned places where lost sheep have wandered off  to, and bring them home. We need to pour into people's lives. We need to be loving the world around us. Worship pastors need to be loving their local congregations. This is the radical call: to feed His sheep.